Does the US Constitution actually apply?

To Governor Dannel P. Malloy, legislators or whom, or which, elected official or to whom the below might concern:

Police told me that I was on their list and could only be arrested and that they were not allowed to protect and serve. I was told I was kicked out of Connecticut, was the current occupant of my Stafford Springs, Connecticut, home. Police offered an informant $10,000 to set me up for a DUI, police beating, and 5 to 15 years in prison because police didn’t want me to have a driver’s license. I broke no laws and told that I would have hell to pay for interrupting “The Revenue Collection System of Police, Lawyers, and the Courts,” according to Officer “Fat Frank” Prochaska. Resident State Trooper Mulcahey told me that I was kicked out of Connecticut along with Prochaska and other officers. I was told if I did not leave, but my wife could stay, I would be beaten, jailed for life, or murdered. I broke no laws.

I had my life threatened by police informants for weeks, police refused to protect and serve. Police would watch as vandals smashed my windows and wrecked my property. Police acted as look outs for thieves and refused to arrest criminals they watched commit crimes. I was then arrested for resisting being beaten on my own property by a police informant wielding a knife, when I used pepper spray. 4 armed, and in uniform, officers committed perjury to say I never asked to make a complaint against my assailant. I lost my marriage, family, contracting business, home, everything. I was sentenced to a year in prison by Judge Jonathan J. Kaplan who told me that I was guilty and going to prison before the “trial” started. I was then told I was kicked out of Connecticut upon my release from prison.

Pre-9/11 police were listening to my phone calls and trolling my internet use. Police were most upset that I had an attractive wife and was not an officer or someone important. They now capture all pictures and content on computers and cell phones. Should police be able to target sexual conquests this way? Should police be able to tell citizens that they work for police, not the other way around? Should the US Constitution not apply in Connecticut? Should police and the courts get unlimited tax dollars and also run scams to collect as much revenue and seize as much property as assets as they can get away with? Do you have any questions for me about the above? Is the above okay with you?


No Separate Branches of Government? 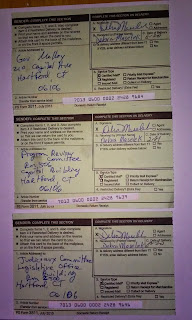 Steven G. Erickson's uploaded and videos are found here:
http://www.liveleak.com/c/SvenVonErick
Posted by The_SRV at 8/18/2014 07:37:00 AM No comments: Links to this post