Are police targets for character assassination ever normal after? 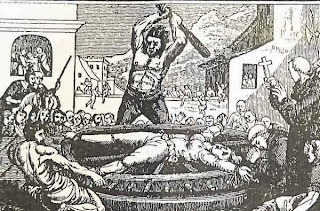 The above image [source] is one of the methods used when a citizen got mouthy in medieval times about police tyranny or being ripped off by the elites in charge. Now, psychological torture is the preferred method of official abuse. Modern tyrants are not immune from ordering official kidnapping, torture, rape, robbery, indefinite detention, and even having police, contractors, and police informants kill a target. Some state sponsored murders look like suicides or that a victim died of natural causes.

Two of my friends agreed to work on a pubic access television show or documentary, showing the physical hard evidence of the Connecticut Department of Children and Families, DCF, being complicit with State Police trafficking heroin and cocaine. A week or two before we were all to get together and start the project, the two of them, living in Connecticut, died of Natural Causes. I did not then make the drive down from Vermont. [Video of Rich's last voice mail left to me].


Yes, anyone is normal after this?: http://judicialmisconduct.blogspot.com/2013/11/the-lasting-abuse-of-judge-jonathan-j.html


Work your entire life saving for a house, buy it, build a contracting business over 2 decades, get married, raise a family, and police then spy on you 24/7 follow you around and refuse to protect and serve and to go after criminals. The police then threaten to break up your family, take away your home, ruin your business, and then railroad you to prison after they send police informant thugs to beat you up. Does it make me "nutty" or rightfully pissed off?

If I knew working weekends and evenings around my 40 hour week would leave me penniless and in prison, I think I would have not worked so hard, saved money, bought a home, and striven for the American Dream. I would have enjoyed my life and known ALL I was taught about the US Constitution, pursuit of Liberty and Happiness was all a complete scam.

Ritt Goldstein also proposed Civilian Oversight of Police legislation and then he was attacked by police informants on his property, as was I attacked on my property by police informants for proposing the same legislation and exercising Free Speech. I was sentenced to a year in prison by Judge Jonathan J. Kaplan. I was trying to remove Judge Kaplan for bad behavior prior to my being attacked on my own property. Ritt Goldstein fled the State of Connecticut after making [this video of testimony in front of the Judiciary Committee legislators in Hartford, Connecticut].