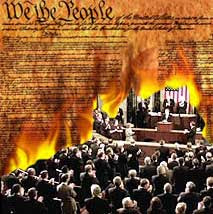 We the people are told we are being protected from terrorists by the perpetrators of worldwide terror. We are told that are money and assets are protected and safe by those who are stealing us blind.

We don't have a government in the US anymore, we have international organized crime with a Police State, domestic and international spying, a military that will be used inside the US as it is being abused in Afghanistan, Pakistan, Somalia, Columbia, Iraq, and other areas of war crimes and illegal occupation. Citizens who want an accounting of the money being stolen, legitimate government, or connect the dots are placed on secret police arrest on sight target lists.

We either stand up, or we're all going to be in the prison nation, US.

The below re-posted [from source, OpedNews.com]

The dissolving Constitution: The Enumerated Rights Are Hanging By A Thread
By paul craig roberts

While people in Tunisia and Egypt have taken to the streets in attempts to gain their liberty, Americans are losing their liberty with minimal protest. Even the American Civil Liberties Union seems unfocused. At a time when we are being surrounded by a police state and the federal judiciary is being taken over by the Federalist Society and unitary executive theory that places the president above the law, we need a heightened appreciation of civil liberty and the Constitution on the part of the American people. The American people need to come together and to take a united stand against the police state and unaccountable executive branch power.

During my many years of writing in defense of law as a shield of the people instead of a weapon in the hands of the state, I have identified two important reasons that Americans are losing the protection of the legal principles that made them free. One reason is that a significant portion of the population, especially among those who think of themselves as conservative, there is indifference and even hostility to civil liberties. The other reason is that Benthamite thinking has made inroads into the Blackstonian conception of law that is the basis of the Constitution. Jeremy Bentham argued for pre-emptive arrest before a crime is committed, for torture in order to obtain confession, and for subverting the attorney-client privilege. Bentham's views, fiercely hostile to those of our Founding Fathers, are now represented on the federal bench (federal appeals court judge Jay S. Bybee, for example) and in prestigious law schools (John Yoo, UC Berkeley, for example).

In chapter 3 of The Tyranny of Good Intentions, Larry Stratton and I contrast Bentham's views with those of William Blackstone and our Founding Fathers. This article is about the division of the American public on the matter of civil liberty.

Court decisions by "activist judges" in behalf of criminals, abortion, homosexual rights, and against school prayer, all in the name of constitutional rights and civil liberty, have resulted in many Americans identifying civil liberty with procedures that provide protections and immunities for criminals and with judicially created rights that are destroying morality. All the fights over Supreme Court appointments have to do with "social issues" such as abortion. The enumerated rights in the Constitution, such as habeas corpus, due process, free speech and association, long ago receded into the background and play scant role in Senate confirmations of Supreme Court appointees.

As a member of the ACLU, I look to that organization for the legal defense of our enumerated rights. The ACLU does stand up for the enumerated civil liberties spelled out in the Constitution. However, reading the current issue of the ACLU newsletter, I found myself wondering if the ACLU is unconsciously contributing to the public's indifference and hostility to civil liberty. The newsletter's list of legal highlights for 2010 presents the ACLU's activities as being concentrated in efforts to legalize homosexual marriage, to protect abortion from curbs, and to end the promotion of religious beliefs in public schools.

These are all issues that infuriate conservatives, and these are the issues that conservatives identify with civil liberties. Therefore, much of the public is not the least bit perturbed to hear that civil liberties are under attack when many understand civil liberties to consist of criminal rights, prayer bans, abortion, and homosexual marriage. This is dangerous, because in the public's mind, civil liberty can easily morph from procedures that coddle criminals into procedures that coddle terrorists. Should this occur, all would be lost. Defense of the enumerated rights would become "giving aid and comfort to terrorists."

It is not my purpose to argue the validity of the ACLU's position on abortion and homosexual marriage. I am sure that the ACLU is convinced that homosexual and abortion rights are somewhere in the Constitution, but they are not enumerated rights, and the conservatives know it. When the Constitution and Bill of Rights were written, I don't know if abortion and homosexual acts were the statutory offenses that they were during much of my lifetime, but they were not socially approved behavior that the Founding Fathers thought worthy of Constitutional protection. The separation of church and state means no state church or taxpayer support. It does not mean no prayer in public schools. Ironic, isn't it, that today with faith-based initiatives we have taxpayers' money going to religious institutions, but no prayer in school.

The unintended consequence of the judicial branch exercising the legislative function in the name of Constitutional rights has been the alienation of a large percentage of the population from civil liberty concerns. Today much of the population views the ACLU as a threat to society comparable to terrorism.

With the police state destroying protections against searches, the First Amendment, habeas corpus, due process, and the right to an attorney, with grand jury subpoenas issued to war protesters, with lists of American citizens to be assassinated, with ongoing war crimes committed in wars based in lies and deceptions, with the executive branch's seizure of the power to violate statutory laws against torture and spying without warrants, should the ACLU refocus, stop alienating conservatives, and bring the people together against the police state?

Should the ACLU be devoting its scarce resources to convincing courts to legalize homosexual marriage when the executive branch can declare people to be suspects and throw them into a dungeon? Reproductive rights and homosexual marriage will not stop people from being thrown into dungeons. If the enumerated rights are lost, no other rights are meaningful.

Dr. Roberts is coauthor with Lawrence Stratton of The Tyranny of Good Intentions, a book that documents the erosion of the legal principles that protect liberty.

Paul Craig Roberts was an editor of the Wall Street Journal and an Assistant Secretary of the U.S. (more...)

[click here] to go to newest posts on this blog