My continuing thoughts on the US Prison "System" 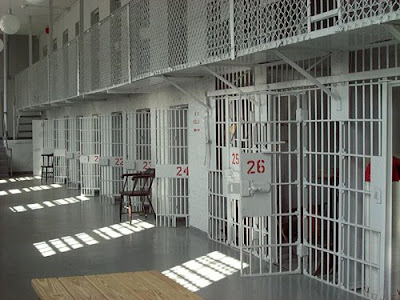 Self-fulfilling prophecies, an Inmate's version of the holidays, and Prison Rape?

Grown men, hardened inmates, can be crying like babies on Thanksgiving, Christmas, other religious holidays, and New Year’s Eve. Left to rot behind bars away from loved ones is ever so, more apparent.

Around this time of the year in 2002, two African American inmates each held one of my arms pulling as hard as they could with me facing the wall in Bergin CI, Storrs, Connecticut, and the head of the block, a mid 40’s Caucasian man, about 6’1, 280 lbs., pulled my inmate pants down, pulled his pants down and started using hand cream to masturbate himself, telling me he was going to rape me. Other inmates were guarding the bathroom door. The man who was to rape me was originally in prison at age 17 for trying to rob an armored car near, or in, Boston. Shotgun pellets bouncing off the armed car from a police shotgun took out one of his eyes. African Americans called me, “The Great Silverback Monkey”, as hair poked out of my tee-shirt from my back and chest, and I looked like a younger, more in shape, and a bit taller version of Charlie Manson with my having discontinued shaving my face.

With my feet barely touching the ground, and severe pain being caused by the outstretching of my arms. I told the former armed robber, “Do you want to keep your remaining eye?”

The African Americans either both said, or one said, “You are one cold M’er F’er!” releasing my arms. The armed robber who previously ran “the block”, no longer did at that moment, because he “punked out” and he had to pay me part of his sports betting racket. Prison guards had to go to me, so I would mediate inmate disputes, and my laundry and bed was made for me, upon my “promotion”. My prison experience [written about here]

I had previously been assaulted from behind, not during a rape attempt. I was carried back to my bunk, and thought I might be urinating blood, as the blow that sent me to the ground was to my kidney. By not “ratting” that had upped my status among inmates. The assault I took that one time was worse than the attempted mugger took being pepper sprayed, the “offense” that got me sentenced to a year in prison.

Most who are incarcerated twice, or more, or even once, may permanently lose contact with their parents, friends, former business associates, siblings, and their children. I haven’t been called “Daddy” since 2002, and don’t get invited during the holidays, don’t hear “Happy Birthday”, and other gatherings go by without me being asked to attend. Yes, there is a real stigma to being a former inmate.

I had no criminal records at the time I was jumped behind in the dark at my rental properties in Stafford Springs, Connecticut. Connecticut State Police were right there on the scene to arrest only me after I pepper sprayed the potential mugger. I had written letters to the editor critical of the local courts in civil cases involving the self-employed and for investment property owners, and was critical of police downtown policies. I proposed Civilian Oversight of Police and court reform to local elected officials. So, I had been followed around and told I would be arrested and put in prison by Connecticut State Police Officers if I didn’t shut my “Big Mouth” and leave Connecticut. [click here] for what passes for “Policing” in Connecticut and maybe other states.

I didn’t flee Connecticut after being threatened with retaliation from Connecticut State Police if I stayed and continued “Mouthing off about drug dealing and prostitution and police doing nothing”, so I was sentenced to a year in prison in a rigged court case for having pepper sprayed the potential mugger.

I have had a hard time getting any work being a former inmate. There are several dates for the same “offense” on my record, that “offense” occurred only once when I pepper sprayed the felon who told the judge in my trial that he had threatened my life while demanding money from me. I fought him off. And when I thought he was going to stab me, I pepper sprayed him. For that, only I got prison. Only I was arrested.

Fairly recently, I secured employment where I was making $1000 to $1500, at least a week, doing contractor type work. I was driving 55 MPH, and a GEICO insured driver sent me to the hospital by ambulance because he caused the car accident and was cited on the scene. That was July 23, 2008. GEICO refuses to pay my medical bills, pain and suffering and lost wages to date. Scroll down for comment # 12, in [this post] for that story. So, now I have no car and lost my job.

I spent Thanksgiving by myself, and probably will spend Christmas by myself. The right side of my jaw is swelled up, and there is blood in my mouth draining from wisdom teeth impacted, or from other teeth. My $8/hour job under the table for a Vermont used car dealer as a driver, didn’t pay me today, and the owner tries to screw me out of hours. I’m in my third week for him.

I almost froze to death one Winter living outside in the snow, homeless here in Vermont, and I’ll promise the same thing to myself again. I will get justice for myself, for others, and somehow re-unite with my daughter and family. I hope to testify and lobby in DC in January on [this subject] and on how the insurance industry, namely GEICO, is harming the economy, medical providers, and family unity.

My father grew up near Fargo, North Dakota, on a farm. There was no electricity and no running water inside the farmhouse. Going out to the outhouse in Winter meant dealing with 60 below zero temperatures. When outside well water was flowing that was used to get water for the Saturday bath for his parents, three older sisters, 2 older brothers, and one younger brother. They took their baths in order of age. My grandfather made the water dirty after his bath, then my grandmother, and each child on down. By the time my father took a bath, the water was probably cold, gritty, and very smelly.

The “Don’t throw the baby out with the bathwater”, was coined during that era, as the baby was bathed last.

So, holidays growing up for me, like Thanksgiving, Christmas, and even family gatherings growing up, I expected to get yelled at and punished if I showed any joy, contentment, or if I was within my father’s eyesight, unlike my two younger sisters. As a child, he didn’t want me, as the oldest to be the bully, he was bullied by his older brothers. He did without as a child, and thought I should too. I elude to that in the “The Spurned Child Syndrome”.

I don’t want any sympathy, and I’m not asking for any sort of help. But, if you would like to talk to me about assisting me in documentary productions, and not so auto-biographical screenwriting and video projects, I’m open to dialogue.

[click here] for my picture, that of my former European lingerie model wife, and the story of the beginning of my saga

I'd be interested in contacting you about police misconduct and court official misconduct. Working on a story here in NJ and media attention via national TV producers.

My email is stevengerickson @ yahoo.com
I don't check it as often as I should. Email me on what you propose or are looking to do. Thanks