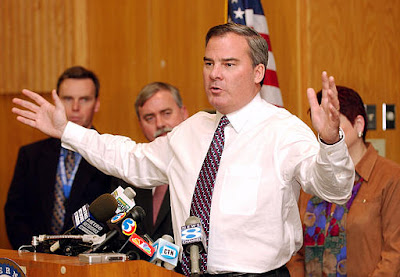 Text of my email:

I see that you are doing well for yourself. You get out of prison, buy a $500,000 house, still have a pension, and now you are off doing speaking engagements for big bucks. Not bad for a convicted felon, but what about the victims of your corruption?

Minorities, poorer Whites, and whistle blowers all suffered because you and others had something to hide. You and your friends went after anyone that complained, had inside information, or were out to expose the corruption that permeates all 3 branches of government in Connecticut, where every single tax paid worker in Connecticut knows that there is hell to pay for exposing the fraud and waste. Unlike you, those that are railroaded to prison, not having done anything wrong are ruined financially, can't own a home, get an apartment, a job, and their families often disown them.

Scores of people like me lived, or live, in Connecticut, paid taxes, owned a home, and just wanted raise families and have a retirement. You helped make the American Dream into a nightmare in Connecticut for so many honest, average people.

Had you been an honest governor when I complained to your office about the corruption in the State Police and Connecticut courts, I would not have been railroaded to prison to shut me up.

Do you just want to go off and sing your praises or do you want to help remedy the wrongs you have caused?

I believe you personally conspired with former Connecticut State Police Commissioner Arthur L. Spada, Judge Jonathan Kaplan, and others, to eliminate me and what I was trying to expose. I am asking that you give information on Spada and others to punish the official criminals who have caused so much misery, harm, and loss to Connecticut, financially. Please give the information I believe that you have been withholding to the proper federal authorities.

I went out live on CT-N, Connecticut Government TV, I was getting 5000 to 10,000 hits on my blogs on Connecticut Judicial, Official, Attorney, and State Police Misconduct on www.freespeech.com. Shortly after telling an audience that if you put in "Connecticut Judicial Misconduct Police" etc. my posts on www.freespeech came up as number one. For a very long time when Rowland was governor, if you did a word search on "Governor John Rowland" my post was #2, just after his official website. That means countless people were reading what I had to say. Here is the testimony that probably caused the thugs in the State Police to see that www.freespeech.com went down along with all of my freespeech posts coming off the Internet:

[click here] for the text of the letter that Steven G. Erickson sends to former Governor John G. Rowland meant to arrive on his first day of federal prison
Posted by The_SRV at 6/24/2008 11:20:00 PM