One of the original enforcers of Connecticut's "Whites Only" unofficial policies: 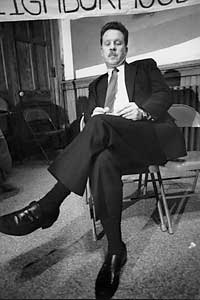 An Isolated Incident? HELL NO !!!

After decades in public life, former top Connecticut cop Bernie Sullivan thought he was slipping out of the spotlight by taking a private job--with the Tomassos.

Connecticut knew Bernie Sullivan as Mr. Clean--the man brought in to lead state police in the wake of a spying scandal in 1989.

He lived in the spotlight. He ran Hartford's police force, then the state's police force--and, later on, the Speaker's office at the state House of Representatives.

Now, three years after he thought he'd slipped away from the spotlight into private life, Sullivan has returned to the public eye--at the center of Connecticut's current corruption scandals.
He's the public face of the Tomasso family's construction empire, the focus of a federal investigation into state government bribery and bid-rigging. It has been Sullivan's job to swing back at critics, answer some allegations, not answer others. He's also running two of Tomasso's companies and wrestling with the state over questionable government payments.

And he's been dragged into the state treasurer's bribery scandal because of his previous job, running then-state House Speaker Tom Ritter's office.

Sullivan wrote that he was "get[ting] out of the fish bowl of public life" three years ago when he left government for the Tomasso job.

"God made me bite my tongue on that one," he said in a conversation last week.

His journey from lawman to Democratic chief of staff to point man for a company intimately connected to a Republican governor illustrates the power structure at the root of Rowland/Silvester-gate.

It's not about Republicans versus Democrats.

It's not about business versus government.

It's about one insider team. With one concern above all: Who gets paid.

[click here] for Faces from a Police State, Connecticut. Police Misconduct is a Connecticut art form.

[click here] Is there still "Gay Bashing" going on in the ranks of the Connecticut State Police?

[click here] for my May 22, 2006, interview of Stephen Murzin. Click on link and open or save in Windows Media Player to list to it. Audio brings up the police using teens, called, "informants" to become recruits for "cop gangs". These street gangs do the cops dirty work and end up in prisons when police no longer have use for them. Can you say, "Obstruction of Justice, contributing to the delinquency of minors, Connecticut police misconduct, racketeering, and corruption of the courts"?

Should kids be encouraged by police to kill others with shotguns and beat up others?

Should a felon on probation, an alleged police informant, get no prison time for stabbing and almost killing 3 people because he was acting under police orders? [click for more]

My email: stevengerickson@yahoo.com
This blog accepts anonymous comments. To share, click on white envelope below.
Posted by The_SRV at 9/09/2007 08:43:00 AM

Hey Steve,
Workers Compensation has violated the terms of the agreement, when I won my CHRO complaint in 2004. Suddenly, they are saying my WC doctor is out of network, so they will no longer pay for my pain medication for my back injury.
I am living on $900.00 a month.
I found out that is a LIE. Commissioner Delaney is in with Gallagher Basset, the insurance carrier for state employees. They are angry that I will not "stip out" my claim, so they are going to just lie and run me out, like they did with my job of 13 years! I am taking this to the Head Commissioner Mastropietro at the OAK STREET office in Hartford. They keep giving me a bogus email address,when I call. I am going to print it out and mail it in, return receipt, and "personal and confidential."
I wrote: "Do I need to go back on the news again in order for your system to stop retaliating against me? I am also calling the CHRO to let them know, that WC has violated the terms of the settlement. I'm back and mad as hell.

Good luck. Why not email me and we can talk.