Why am I upset with George W. Bush?:

I mailed a letter to President Bush on 9-15-01 discussing the problems I was having. I was then attacked on my property 10-11-01 by a police informant. I pepper sprayed my attacker in my dark driveway. Police were right there to arrest me. If the Bush administration was not so deceitful and arrogant, I think I and so many other citizens would not have been ripped off needlessly and abused. Our economy and national reputation would also be better. My letter to Bush: 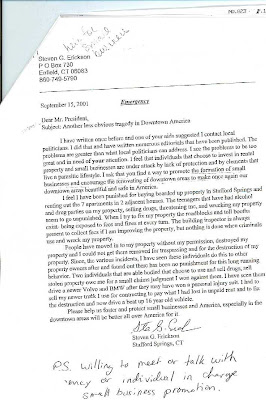 If you click on it and save it, you can use a view to make it bigger.

The HUD response telling me Bush actually read my letter: 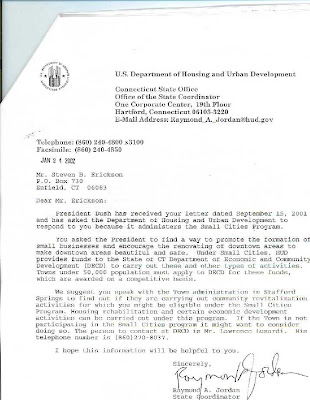 In the follow up report I am called the victim: 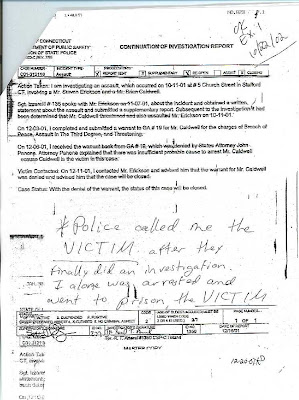 I was current on mortgage payments on 3 rental properties. Two of which I fixed up from a boarded up condition spending hundreds of thousands of dollars and years of my labor. I had also built up a contracting business over 2 decades. My reward was that a strong armed robber, a mugger, a felon, could threaten my life while demanding money in my own dark driveway, beat me, and he is not arrested, I am for using pepper spray and I go to prison.

An open letter to Stafford Springs, Connecticut asking why young and old criminals are rewarded and honest property/business owners are punished.

I was a successful bidder at a CT HUD auction in '94, buying a single family house on Brown Ave Ext, previously known as 'Cat Alley' in older town records and not because there were 'cats' in an alley. Moving into what was one of America's first Spa/Resorts (only in heyday which lasted until early 1900's) and did not know what I was getting into and how my life would be adversely impacted.

I had only owned the house for a matter of a week or so, when I discovered my mail opened with a child's writing with threats to leave town and a separate incident on coming home to a pry bar stuck in the door. I called Troop C State Police in Stafford Springs, the responding officer told me it was too bad I bought property in a crime/drug area, that there was nothing he was willing to do or investigate, and if it was youths, the police did not have time to deal with youth crime.

I joined the Crime Watch. The woman who started the Crime Watch could not even walk outside with her baby, battling teens that would swear at her. These teens would openly drink, sell drugs, smoke cigarettes. The ones I became aware of would openly vandalize houses, break into houses, sell stolen items, sell drugs from drive thru style/open air drug markets in Stafford.

Hold ups, break-ins, muggings went somewhat investigated, although most downtown residents knew the names of perpetrators, but most of them knew they were wasting their time reporting these individuals to police and would cause the teens and criminals to retaliate against the 'cop caller' and police would also become hostile to the caller. A couple that was part of the start of the Crime Watch got sick of the 24 drug market and teens wilding, could not get police to remedy the situation, just let the bank foreclose on their house to escape Stafford Springs, Connecticut, and the rampant teen, drug, and crime problem.

My wife fell down the stairs at our home as she had not drank enough fluids and was sick. I called for an ambulance. I was known to police from being vocal at crime watch meetings and they had become hostile to me. When an ambulance arrived with police, I tried to walk over to my wife to try to cover her up as she was exposed when she was on a stretcher and a Stafford police officer slammed me into my house and told me that they were going to arrest me as they thought I may have pushed my wife down the stairs. Rasa was a former Lingerie model I had met while in Europe and told police that I was not near her, so the officer could not concoct anything then.

In '95, we finally took our honeymoon in Hawaii, and took a month vacation to her native Lithuania, and then to Poland, Latvia, and Estonia for a month. After coming home I continued my rounds downtown as part of the crime watch. A 14 year old, Amanda F, propositioned me for sex for money which I reported. I stumbled on Peter P. and a powdered cocaine drug deal. Peter P. called me an undercover cop and told me to leave the area. I did not and Peter (6'3 or so, possibly 280 lbs, I was 175lbs, 5'9) picked me up by the neck, pummeled me, and tried to bite my ear off (blood trickled all the way down to my underwear). Peter took off from the scene after I dialed 911 as his friend told 'Pete' that he was holding drugs and the police soon would be there.

Pete's friend told police they did not see anything. I persisted calling police worrying I may have contracted a disease from the human bite from the drug dealer. Police relented and took me to all the bars in town where I found Pete. I then was arrested at my house in front of my wife six weeks later, as Peter P.'s friends who had previously told police they did not see anything and did not know my assailant, wrote statements saying I had attacked their friend without provocation and he is in fear of me.

I told the prosecutor my account and was told it was not whether I was guilty or innocent there was enough on her plate to collect a fine. I went to the Stafford LT that I had given information to. He told me I had interfered with a drug investigation and the police were looking to confiscate a bar and a house. The officer told me I was not allowed downtown unless I did drugs. The LT called the prosecutor to get my charges dropped, thinking I would now keep my mouth shut and stay out of the downtown in which I lived.

My wife told me I lacked good judgment locating us to Stafford, and we later divorced. I recovered from the break up in Paris, then bought a 2 family house in Somersville, CT, and the 3 and 4 family houses that were boarded up, next to my former single family house in Stafford Springs, Connecticut in Summer '98.

I had trouble getting teens and drug dealers to stay off my Stafford property as they told me they were there first and continued to have drug and alcohol parties breaking into my properties. 'Jaybone' D. pulled a gun on my and chased me into my house when I told him to not sell drugs off my yard. Jaybone would have drug/alcohol/sex parties with underage girls at his Brown Ave Ext apartment. John T. slammed my head into my house when I asked him not to sell drugs off my yard. As far as I know police did not do anything about either situation.

I started renting out the 9 apartments as I fixed them up. Stafford Police and Connecticut State Police would refuse to do anything when my property was destroyed, broken into, when I was attacked and threatened, when teens and tenants fought, had out of control drug/alcohol parties, sold drugs and stolen items to no avail. Police told me that they did not serve downtown property owners, especially landlords.

I got fed up and started writing letters to the editor describing the rampant drugs and crime in Stafford Springs and the lack of police help. I proposed civilian oversight of police to legislators. I wrote Bush September 15, 2001, about the teens drinking/fighting/selling drugs off my front yard all hours, how frauds flourished, and how all this hurt small downtown business and property investors. I got a response from that letter from the SBA and HUD. I had finally gotten all the apartments rented and had only one problem tenant I was in the process of evicting. I finally felt I turned the corner as I was finally having money coming in after years of hard work. I was happy that I had cleaned up my little corner of the world and had with my own efforts stemmed the tide of the drug trade myself on my end of the main drag of Stafford. I would own about $500,000 in real estate and could retire on the $6500 gross monthly rents in as little as 12 years when the mortgages were paid off.

Stafford Officers and Connecticut State Police began to tell me I was to leave town. An alleged police informant, Brian C., began to harass and threaten me. I would have to get to my vehicle quickly as he would chase me to my back door. He disturbed my neighbors after midnight banging on my door telling me he would cut my penis off if he caught me outside.

10-11-01, Brian C, told my tenant Don L. that he would not have a landlord as he (Brian C) was going to kill me when I got home. Brian C. left me a voicemail at 1PM telling me he would 'hurt' me when I got home. Brian C. left a threatening message on tenant, Sue J's answering machine. Brian C finally caught me on my yard at almost midnight. I had worked a double shift and was too tired to notice him when he beat me severely from behind demanding money or he said he would kill me.

I pepper sprayed Brian C. and police were right there to arrest me and refused to take my complaint against Brian C. The arresting officers committed perjury at trial and I was sent to prison losing everything. Police had allowed Brian C to harass, threaten, and attack me all the way up to trial. From my personal experience I can say hard work and property investment is punished with prison and being run out of Connecticut, and teen delinquency, alcoholism, vandalism, drug use, and their older criminal career parasites are also welcome and encouraged in Stafford Springs. I have lost my family, pets, and everything I have ever worked and saved for.

I was treated with the maximum harshness by the legal system after being declared the victim of a robbery/beating on my own property. I think the downtown drug and crime problem is the fault of the police and policy makers. Crime cannot be curbed by targeting the wallets and purses of honest taxpayers while almost ignoring criminal activity.

Will police officers in Connecticut pay $10,000 cash to a police informant to kill you if you lodge a police misconduct complaint? [click here] for piece

Do the Connecticut State Police have a secret "Enemies List" where they arrest citizens for political reasons so they can be held as political prisoners in Connecticut's jails? [click here]
Posted by The_SRV at 3/22/2007 10:12:00 AM